Increasing attention is being drawn to the Anthropocene’s ‘two lives’ (Moore 2016): the first as a scientific pronouncement of a new geological epoch defined by human impacts upon planetary systems, and the second as an increasingly prevalent public discourse that challenges understandings of the human and the natural. Focusing upon the Anthropocene’s second life, the Global Lives of Orangutans (GLO) explores the multiple discourses and narratives of the Anthropocene and how they are experienced, contested and realised on the ground in multiple sites. Working with University College London’s Widening Participation programme gave me the opportunity to explore how ideas of the Anthropocene are comprehended and cut down to size not only in conservation practice, but in the classroom as well.

Untangling the Human and the Natural

On Monday July 9th 2018, I delivered a workshop on ‘Untangling the Anthropocene’ for a group of twelve Gifted and Talented sixth form students. We began by investigating their understandings of the practical and conceptual relationships between humans and Nature. 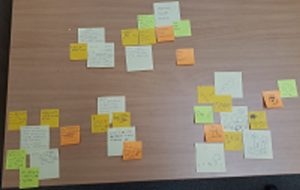 On post-it notes the students jotted down I) words they associated with Nature, II) a definition of Nature and III) an image of Nature. 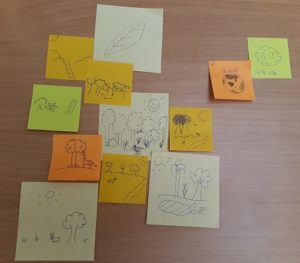 The majority of images featured leaves, trees and other plants, some accompanied by mammals, but some instead depicted a globe. None explicitly depicted humans in/ as part of Nature.

Yet there was a clear tension in the definitions of Nature the students supplied. Many defined Nature as the absence of human intervention, whereas others glossed Nature as the interconnections between all living beings, implicitly incorporating the human. Consequently this question of whether the Anthropocenic refutation of a modernist purification of Nature and Society leads either to a total entanglement of beings (Moore 2016) or an analytical separation but not a split between Nature and Humans (Swyngedouw and Ernstson 2018) found its resonances in the classroom.

Questioning narratives of the Anthropocene 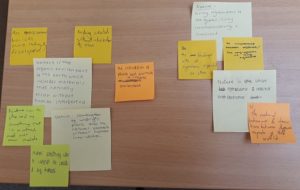 Compassion and responsibility for the nonhuman

Continuing the concern with responsibility and how the natural is defined, I led a series of spectrum lines. A spectrum lines involves a statement being given, and one side of the room being designated as agree, and the other as disagree. Participants then position themselves in the room according to how strongly they agree or disagree with the statement, and explain their positioning. There was a large scale disagreement with the first statement – ‘human lives are worth more than nonhuman lives’ – with one student opining that all beings had an equal right to life and another expressing a pragmatic concern for protecting human lives over plant lives, but not as an expression of the greater value of the former. Students also rejected ideas of greater human value, but highlighted the significance of the increased power humans had over nonhumans. In response to the statement that ‘humans are just another species of animal’ one participant emphasised the possession of empathy as a distinguishing characteristic of humans and a crucial quality for navigating the Anthropocene.

Orangutan conservation in the Anthropocene

Finally, the students turned their understanding of the Anthropocene onto issues surrounding orangutan conservation. One group proposed looking at the root cause of deforestation in terms of challenging the logics of profit and economic demand that underpinned the palm oil industry. Another favoured the role of people here in the UK, and advocated a large scale palm oil boycott. The third group focused more on community engaged in conservation practices, exploring how sustainable development goals could be achieved through orangutan-centred eco-tourism, protected areas enforced through the engagement of local, voluntary park rangers or the protection of local farmers’ produce from crop stealing, through creating agricultural areas intended for apes to graze in. All three groups recognised the urgency and complexity of the questions facing orangutan conservation today, the multiplicity of scales and actors involved and the problematisation of notions of pristine, wild nature that many of these solutions entail. 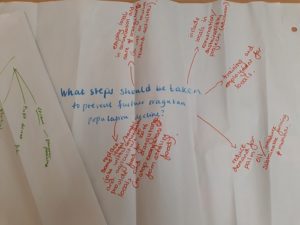 While two hours didn’t give us enough time to fully untangle the Anthropocene and resolve all the challenges facing orangutan conservation, it demonstrated the relevance of the main questions explored by GLO to a non-specialist audience. The students responded enthusiastically and compassionately, surprising me both with their level of concern for wildlife conservation and their willingness to embrace the concept of a new human-dominated geological time period and its potential implications for future action. I left the classroom with a new optimism concerning how the politics and discourses of the Anthropocene can and are being enacted and contested in a range of contexts.