In December 2018, GLO organized its first major event: a workshop called “Conservation and the social sciences: beyond critique and co-optation”. Putting conservation scientists and professionals and anthropologists and other social scientists in conversation, it asked how the conservation/social science relationship could be pushed beyond two common impasses – critique and co-optation. The outcome, as Paul Thung writes, was both challenging and invigorating. Paul is a PhD student on a related orangutan project at Brunel (https://pokokborneo.wordpress.com), and helped organize the GLO workshop.

The profound effects of human activity on the environment threaten wildlife and ecosystems, and undermine the very distinction between nature and people. This situation, epitomised in the concept of the “Anthropocene”, poses a whole series of challenges to traditional forms of nature conservation. Among them is the increasing need for conservationists to collaborate with social scientists.

One sunny winter’s day an unusual mix of 22 primatologists, conservation professionals and social scientists descended on King’s College, Cambridge. We discussed our respective strategies and challenges, and were pleased to find much enthusiasm and potential for finding common ground.

A recurring theme was the challenge of working across difference. Orangutan conservation involves many actors and processes: orangutans, conservationists, environmental dynamics, local people, governments, commercial interests, international supporters and increasingly also social scientists. Below I reproduce some key points that were made during the workshop regarding the need and the possibilities for juggling their different viewpoints, priorities and dynamics.

A first set of differences that featured heavily in the debates can be brought back to a disparity between conservation and local realities. The social relations and practices of producing knowledge particular to conservation lead to ways of interpreting and representing the world which can be partial, inaccurate, or unhelpful.

Biological scientists and conservation leaders, two groups with considerable overlap, produce the majority of facts, stories and images in conservation. They are influenced partly by their own disciplinary priorities and values. But equally influential are the development of new technologies, and the interests and expectations of funders, supporters, journalists, and governments. 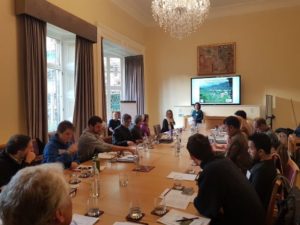 Workshop participants reflected on the potentially damaging ways in which these relations and their accompanying knowledge practices can emphasise outsiders’ narratives, priorities, and understandings over local ones. Because charismatic flagship species like the orangutan capture the global imagination, they tend to take centre stage in conservation interventions at the expense of other issues which may be more salient locally. Conservationists find that bold messages best grab the attention of international funders and supporters, and in their communication gloss over much of the complexity that they face on the ground. In the process, as social anthropologists and others have found, experiences, priorities, and activities of indigenous people and other local stakeholders can get marginalized or misrepresented.

We also discussed errors in prevalent understandings of the orangutans themselves. Recent studies suggest that they are less solitary, more capable of sharing forests with humans, but also more vulnerable to hunting than has previously been assumed. This has important implications for existing conservation strategies, which have conventionally focused on forest preservation rather than on facilitating human-orangutan coexistence within and beyond forested areas.

These differences between the understandings and strategies of conservation on the one hand, and local realities on the other, can hinder the proper identification of conservation priorities, make it harder to gather the support and expertise necessary to address them, and antagonise people on the ground.

During the workshop, we discussed a range of new technologies, which each promised in a way to bring conservation closer to local realities, either through improved understanding of these realities, or better communication of conservation messages. Camera trap images, for example, have taught us that orangutans spend more time on the ground than previously thought. These same images are also powerful tools for showing what conservation is about, to both local people and wider audiences.

Drones are another promising technology. Drone images can create a basis for spatial planning negotiations. Different stakeholders often have different experiences of a landscape, but drones can quickly create a shared sense of what is where. Drones are furthermore useful as a quick method for conducting research on orangutan ecology. Anybody with an internet connection could also help analyse such drone images through on-line platforms. This public participation in orangutan research is simultaneously an awareness raising tool. It makes visible the often overlooked fact that orangutans do not just occur in pristine forests, but can share landscapes with humans.

Conservationists are also increasingly turning to social media as a conservation tool, which can be exploited for spreading as well as obtaining information. By engaging in on-line conservations and spreading educational content, conservationists hope to influence local norms and practices. At the same time, through the analysis of data on social media (or other sources of big data), conservationists can also get a better idea of existing attitudes toward wildlife and the effects of their campaigns.

Despite these opportunities, two profound dilemmas haunted the discussion.

The first concerns the nature of technology. Workshop participants reflected that technological innovations are often seductive, and popular with funders. But they may be inappropriate, creating more problems than solutions. Or excessive, leading to an overabundance of data rather than useful insight. Technologies can moreover transform conservation itself in unsolicited ways. As highlighted by recent controversies over wildlife documentaries, technologies that render animals visible render other realities invisible. This can also be seen in innovations that enable the public to interact with animals through live cameras, social media platforms and interspecies videogames. More than just spreading conservation awareness, these technologies create new digital worlds that transform the very idea of what nature is and how to conserve it.

Conservation and the social sciences

Anthropology and other social sciences are well placed to shed light on such dilemmas, even when there are no easy ways out of them. After all, anthropologists specialise in understanding complexity, heterogeneity, and social transformation, among other things. Social sciences can help evaluate existing conservation practice, show the need for new strategies, and improve understanding between different perspectives. On this point, however, the workshop brought up a second set of differences : those between conservation and the social sciences.

To start with, these two fields often have different aims. Conservation is driven by a sense of urgency concerning the loss of natural diversity and the mission to save it. The social sciences aim, in principle, at a deeper understanding of this world, with a particular focus on humans. As a result, they have different norms concerning the appropriate timeframes and spatial scales of research. The ethnographic particularities that anthropologists are concerned with tend to resist the generalizations that conservationists need to develop  scalable strategies.

There are also different preferences regarding the extent to which complexity should be embraced or reduced. Complex narratives more accurately represent reality and local people’s experiences, and are therefore favoured by many social scientists. Conservationists, on the other hand, find that too much complexity can distract from and hence undermine their urgent mission.

To sum up, difference was in various ways the central theme in the workshop. We discussed problems arising from the disparity between conservation and local realities, and the ways in which technology promises to address them. There is also a clear role for social scientists to analyse underlying dilemmas and fundamental differences. But while social scientists can inform and advise conservationists about local realities, both parties must also seriously consider the ways in which social science can differ from conservation.

Since it is not always possible or desirable to erase such differences, the challenge we set ourselves is how to work across difference. Working across difference means that conservationists and social scientists can remain committed to their own critical and urgent agendas, but requires both sides to allow their work to be transformed by the other.

I hope this brief summary gives a flavour of how stimulating and constructive the workshop has been for us. A big thank you to all the participants for making it so!

And for those who want more: we are currently writing a more comprehensive synthesis of the workshop, which shall give an overview of the state of the art in orangutan research and conservation, reflect on common challenges, and point to ways forward.