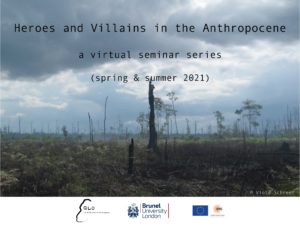 The Anthropocene – the proposed designation for a new geological epoch defined by human activity and a powerful encompassing conceptual framework in itself – evokes various human and non-human figures, such as zombies (Povinelli 2016), ghosts and monsters (Tsing et al. 2017), as well as victims, heroes, and villains. In the face of accelerating extinctions, deepening social and ecological crisis, and anthropogenic impact on a geological scale, questions of blame, responsibility, and victimhood (Rudiak-Gould 2015) take centre stage: Who or what is to blame for the mess we are in? Who and what will suffer? And who or what can bring salvation?  Answers to these questions abound. Visions of the Great Anthropocene (AsafuAdjaye 2015) present a last chance for Anthropos’ heroism to shine through,while the idea of symbiogenesis (Haraway 2016) challenges humans’ exceptional status and urges us write ‘stories without human heroes’ (Tsing 2015: 155). Other scholars deconstruct humanity as a universalizing figure altogether (Malm and Hornborg 2014), highlighting the villainy of capitalist systems of commodification (Moore 2016) and colonial violence (Davis and Todd 2017). At the same time, endangered charismatic megafauna, evoking sentimentality, sympathy and awe (Lorimer 2015), are positioned as blameless victims in need of conservation heroes to save them from extinction, while local people entangled in human-wildlife conflict often get demonised (Lustrum 2017). Indigenous people, in particular, are frequently portrayed as either environmental heroes or irresponsible villains of ecological degradation (Sletto 2015).

Meanwhile during the COVID19 pandemic, the virus as anti-hero has arisen as a new Gestalt of our time, with bats (Pereira et al 2020), MAIT cells (Haeryfar 2020), and other non-human animals and insect hosts and vectors being discussed as ‘epidemic villains’ (Lynteris 2019), and the epidemiologist celebrated as cultural hero (Lynteris 2016). Alongside these new figures hopeful visions of resurgent natures have emerged (Searle and Turnbull 2020), often paired with a misanthropic denunciation of humanity as duly punished.  What other human and non-human figures does the Anthropocene provoke? What insights do these bring to our understanding of Anthropocenic realities? And what further nuance is needed to look beyond the commonly evoked hero-villain binary (Ashby 2020) to explore how the Anthropocene is experienced, contested, and negotiated across multiple settings?

We invite proposals for presentations to contribute to a virtual seminar series on ‘Heroes and Villains in the Anthropocene’ (Spring and Summer 2021). Organised as part of the Refiguring Conservation in/for ‘the Anthropocene’: The Global Lives of the Orangutan project (ERC Starting Grant no. 758494, https://globallivesoftheorangutan.org/) at Brunel University London, this series aims to bring together scholars from diverse disciplinary backgrounds and at all stages of their career in an ongoing conversation that – we hope – will culminate in a writing workshop in Autumn 2021 (virtual or in person, depending on the conditions) and a joint publication afterwards. Presentations should last up to 40 minutes, and can take different formats (as long as they work virtually).
Please submit an abstract of ~200 words by January 4th 2021 to Hannah Fair (hannah.fair@brunel.ac.uk) and Viola Schreer (viola.schreer@brunel.ac.uk). We expect decisions to be made by January 15th 2021.